The challenges of re-branding a 70-year-old success story

Assets have grown more than 30% and membership by more than 45%.

A simple truth: Your brand is little more than what people believe about you. It is rooted in the customer experience you provide.

In 2010, Telco’s leadership embarked on a long journey to rebrand and reposition the credit union to overcome the most significant barriers to their growth. But how do you change something as fundamental as your name, while maintaining the core drivers of almost 80 years of success?

The financial crisis that began in 2008 incited significant distrust of financial institutions. To compensate for dwindling interest revenue (and regulatory pressure on other revenue streams), banks were inventing new ways to add and increase fees. The relationship between consumers and banks had become contentious. This wasn’t a matter of low customer satisfaction but customer antipathy.

Combine that cultural souring toward banks with the way that technology had freed customers from reliance on branches (through mobile apps, remote deposit capture, etc.) and you see a distance that rarely exists between an industry and its customers.

The banking environment had radically evolved. Rebranding and repositioning the credit union required more than just a firm grasp of the barriers to Telco’s growth. We also had to be in tune with the broader climate in which the rebranding would occur.

Understanding both would identify some great opportunities for growth. We chose research methodologies with those two objectives in mind. Those ran the gamut from secret shopping and man-on-the-street interviews to focus groups and phone surveys.
After distilling the qualitative and quantitative data from our research, we identified two main barriers facing Alabama Telco Credit Union. First, far too few people know what a credit union is or how they differ from banks. In the focus groups, even some credit union members failed to understand the difference between Alabama Telco and a bank.
Second, the name – Alabama Telco – was a significant barrier to non-members because of ambiguity over what Telco was, and a strong perception that Telco was exclusively for those who work for the phone company.

Creating a name: the process

Few things in marketing are harder than naming a business. To quote Linda Cencula, Telco’s CEO: “When we began this process, I thought we’d have a new name in a few weeks. I had no idea.”

Any new name must meet a long list of requirements. It has to be easy to say and easy to spell. It has to be memorable, no small challenge. It has to be distinct, not just within its industry but in the world. As we pointed out to Telco’s executive team, the sign on your business doesn’t have to compete with other banks and credit unions, it has to compete with the visual assault by every sign and every business on every crowded highway and street.

Beyond that, a new name has to come with a URL we can own and be something we can trademark for legal protection – both giant hurdles.

We concepted and researched literally thousands of names. We helped Telco work with two other agencies over the course of 18 months. Names died for almost every imaginable reason, some for legal challenges and others for reasons completely random. But, over time, a handful of options kept surfacing, round after round until one name distinguished itself across every group of stakeholders and became the unanimous choice: Avadian

It is a constructed word with no inherent meaning, no context in which to evaluate it.

“Avadian is original,” Cencula says, “and truly original ideas scare people because they exist outside of our comfort zones, which explains why it took time for everyone to embrace it. As a made-up word, it is open to us to define through the experience we provide our members and our extended marketing efforts.”

And that, of course, is exactly why the name works.

Creating a Position Founded on the Customer Experience

Avadian is the only financial services institution that will go out of its way every day to value you as a person, to make you feel delight and to improve your financial life.

Creating a position for a bank or credit union is, to say the least, difficult. Most of us are strongly indifferent toward our bank. That is, until we have a negative experience. Most of the time, we think of our bank as one more stop on a list of errands, squeezed between the grocery store and the dry cleaner. 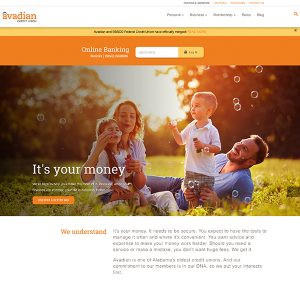 The industry, in the pursuit of maximum efficiency, has also redefined impersonal. Banks use technology to streamline the delivery of their services, creating a common, repeatable, if impersonal, experience for the vast majority of customers.
Since most banks treat their customers like commodities, is it any wonder that people look at their banks the same way?
Moving your finances to a new institution is painful, however, so most people endure in silence the rather indifferent service common today.

In contrast, Avadian has a long history of eye-catching customer satisfaction scores. They’ve proven over time that they truly care about their members’ financial success, and that caring shows up in a thousand different member stories.

In crafting their new position, we leveraged these personal stories to demonstrate how Avadian treats people better. While saying “we take your finances personally” can easily sound cliché, it becomes authentic when you see the people of Avadian live out the promise every day. And that became the challenge of the project— to show the brand in action, to demonstrate their beliefs and their commitment.